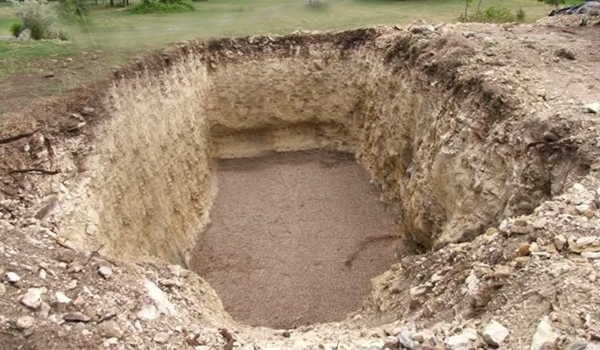 Last night in dreams I came upon several men who were beginning to dig a large hole into a hillside. They began at the top of a hill, which was flat, and began digging down and part of the hole then opened up like it was carved into a terraced hill. The men who were initially diffing were all of middle eastern descent. When I arrived they had finally dug down to what would eventually be the floor of the hole and were beginning to level it out. At this point, I jumped in and began to assist in the digging and leveling until the hole was completely dug, clean and a large opening had been cut from the hillside into the main portion of the dig.

At that point, the people doing the digging became Jewish and we were working on beginning to line the floor and walls with stone so it would hold water.

What emerged that this hole would become is a purification bath to immerse oneself in and because of the lineage that it was working with, the Abrahamic line of Judaism, Islam, and Christianity, the top of the bath was open to the skies so it could receive rainwater, much like a Mikveh, which is a ritualistic bath. Sometimes the word mikveh refers to a vessel that is not made by humans that can collect water. As the work continued I was letting those working know that finding a mikveh to collect rainwater for visitors to wash their hands and feet and head before entering the pool was an important step and the discussion was about finding a large crystal capable of holding a fair amount of water.

There was to be no roof built over the top of the pool, so it was always open to the sky, stars, and the greater cosmos, which would continuously energize the water, and once the pool was complete it will be available to anyone who wishes to enter and purify themselves.

This was a dream that went on for hours and hours and hours last night and even though at the time of the dreaming I did not know what it meant, I knew that it was of great import. This morning in sharing the dream with others, the final transmission came through, that it is the beginning of the re-merging of the three Abrahamic lines back into one. It is also significant that the pool will be open to everyone. No one will ever be excluded for any reason.

This is another in the steps being taken by so many all around the world in healing many of the separation wounds that have plagued generations of peoples for many centuries.

May all Beings be Free.